This patient was interested in improving her appearance but was a little fearful of a dramatic surgical procedure.  She was concerned that she appeared tired and stressed all of the time although this did not reflect her health and vibrance.  Other concerns were addressed with regard to her history of sun damage and multiple skin lesions.  These problems have been worrying her for quite some time because she did not know that improvements could be made with minimal to no scarring. 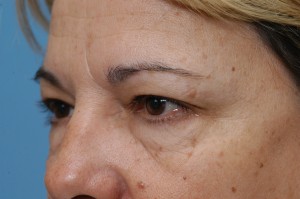 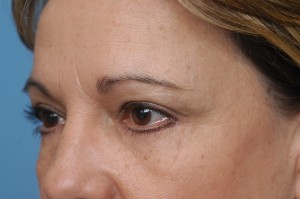 After discussing her options we decided on a treatment plan.  The first step was the removal of skin lesions.  I used a technique to remove the lesions without sutures and without freezing or burning which can damage the surrounding skin.  Twenty to thirty areas in the face and neck were treated in two sessions under local anesthesia.  Much of this was covered by insurance.

She then underwent upper and lower eyelid blepharoplasty with an endoscopic forehead lift.  The goal of the forehead lift was to soften the lines of the forehead and reduce the heaviness of the brows.  The lower eyelid surgery was performed with a fat transposition technique.  Instead of using the traditional method of removing fat from the lower eyelid, it was moved out of the eyelid and placed in the tear trough and upper cheek.  This filled the groove between the eyelid and nose as well as provided more fullness to the upper cheek.